In the interest of reducing our carbon footprint and sleeping in for 15 minutes more every morning, hubby and I have switched up our morning commute. Now rather than being driven to my office we drive to his office – which is on the train line and a 10 minutes train ride from my office.

But you know what they say about the best laid plans.

First of all, the train platform is not heated because apparently the city is run by people who hibernate and are therefore blissfully unaware of winter. I am having increasing difficultly balancing fashion with warmth.

There is a point those two things become mutually exclusive. That point hovers around -25 degrees Celsius.

Second, the train is like a sardine can. There is  no way I can hold a coffee, my purse, my lunch, my shoe bag and still hold on so I don’t fall on the lurching train.

So this means I don’t get my morning americano enroute to his office/my transit. That is really making it hard to smile as I arrive at work, but I am being a trooper and enduring my coworkers even while in my non-caffeinated stupor.

I thought that I could manage until 10 by drinking a bit of office coffee, at which point I would simply take a two block saunter to Starbucks. But WTH office coffee? W-T-H? It’s bum coffee. It offends me. It is worse than the caffeine headache.

Plus then we had that series of -37C with windchill days. There was no way I was going outside and Starbucks does not deliver (I asked). So I had a terrible choice. Bum coffee all day, or tea.

I chose tea. It may be caffeinated but tea is a poor substitute for coffee, and the only way to make it better is to be stoic. I have gained much insight into the British disposition. Cultural idiosyncrasies explained.

Well, today the weather broke. It is a balmy two degrees above zero morning and I wrapped up and skipped off to Starbucks. I joyfully got my americano. It sounds like a happy ending. Right? Nope. In my absence they had become lackadaisical about stocking and had let the whole store run out of my preferred raw sugar. 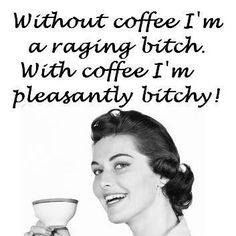